A misdemeanor is any offense punishable by up to one year in Jail. Typical misdemeanors are: driving under the influence of alcohol / drunk driving (dui / dwi), shoplifting, domestic assault, Second (2nd) offense refusal to take the breathalyzer, driving on a suspended license, writing bad checks, domestic vandalism, simple assault and battery, domestic disorderly, reckless driving, disorderly conduct, etc. There are different rules that apply to driving with suspended licenses and this article does not fully address those provisions.

If you cannot afford an attorney to represent you then you should contact the Public Defender. The Rhode Island Office of the Public Defender represents eligible clients in criminal law matters (misdemeanors / felony) for no charge. Do not use this article as a substitute for seeking independent legal advice from a lawyer.

It is a very bad idea for a person to represent themselves (pro-se) in a criminal case. Please note that this article only applies to Rhode Island misdemeanor offenses and does not apply to any other states!

A person should never change their plea from not guilty to nolo contendere or guilty without a plea deal from the prosecutor.

In Rhode Island, a defendant can enter one of four pleas: guilty, not guilty, nolo contendere or an “alfred plea”.

Guilty and Not Guilty Pleas

The pleas of guilty and not guilty are obvious. If the plea is not guilty then the matter will be scheduled for a trial on the merits in which the prosecution must prove beyond a reasonable doubt that the person is guilty of the alleged offense. The person will be presumed innocent and it is the prosecutions burden to prove that the person is guilty. Usually, it is a very very bad idea to take a guilty plea! Guilty pleas or a finding of guilt after a trial is always a criminal conviction in Rhode Island.

However, anything with a fine attached to it will be a conviction under Rhode Island law. Therefore, it is important that the defendant gets either no fine or a contribution to the victims fund or court costs rather then a fine.

All misdeameanor plea agreements in Rhode lsland should be nolo contendere with court costs or a contribution towards the victims indemnity fund rather then guilty pleas!

Alfred Pleas are strongly disfavored by judges in Rhode Island (RI) and are difficult to get. Alfred pleas derive from a United States Supreme Court case. In an Alfred plea, a defendant will admit that the state has sufficient evidence to convict him or her if the case went to trial but will not admit to anything.

Obviously, the defendants best result is either a dismissal by the prosecution or an acquittal.

What is a “filing” in Rhode Island?

A one year filing is usually only offered by the prosecutor as a penalty for first time offenders. A filing is a penalty that is typically offered for first time offenders for relatively minor misdemeanors. A filing is the lowest form of penalty available and is always better than probation for an accused. A filing is when the case is put aside for a year and if the person stays out of trouble for a year then the case is eligible to be expunged and destroyed at the end of the year.

Be careful, do not forget to have your filing expunged at the end of the year! It is not automatic. A certified copy of the expungement order must also be sent to the Rhode Island Attorney General ‘s office, the Rhode Island State Police and the local police department that pursued the criminal charge. In the event that a person is found guilty after trial, a person could still be sentenced to a one year filing. However, any guilty finding after trial will constitute a conviction. A guilty finding with a penalty of a filing should be appealed to avoid a conviction.

If a one year filing is offered by the prosecutor / city solicitor and is accepted then the case will be “filed” for a year. This is commonly called a “filing”. If the defendant does not get arrested or get in other trouble and complies with the conditions of the filing during the one year period then the case can be easily expunged from a person’s record after the year.

What types of filing are there in Rhode Island

If the person violates his filing by not complying with the conditions of the filing then the persons filing can be revoked by the Court. If a person takes a nolo contendere filing and gets into further trouble, violates the conditions of the filing or is arrested on a new offense then the person will be hailed back into court to be sentenced on the filing. (unless the filing was a not guilty filing which means the prosecution must prove the defendants guilt) There are various conditions that can be put on a filing inluding alcohol and drug counseling, domestic violence counseling or classes, restitution, no contact with the victim and community service.

A person that has a filing is subject to being held at the aci for 10 days as a violator of his filing if he is arrested for a new offense during the filing period.

What implications are there for domestic violence offenses in Rhode Island?

If the underlying charge is for a domestic offense such as domestic assault, vandalism, or domestic disorderly conduct then the defendant will be ordered to have no contact with his wife, girlfriend or the victim as the case may be.

Upon entering a plea or being found guilty of a crime with domestic implications then the defendant will be ordered to complete a batterers intervention program which involves attending classes. The defendant can also be ordered to pay restitution to the victim if applicable and obtain substance abuse or mental health counseling. Failure to attend the Batterers classes or failure to pay restitution or failure to attend counseling could be considered a violation of probation or a filing.

Violation of Family Court Complaint protection from Abuse restraining order is a crime in itself and also may constitute a violation of probation, bail and violation of conditions of a filing.

Issues concerning custody and visitation of children as well as divorce and family related matters:

The District Court in a criminal case cannot be involved in setting vistitation or dealing with issues concerning divorce or custody of the minor children. The Rhode Island Family Court is the proper Forum for dealing with issues related to divorce and child custody such as: child support, visitation, financial restraining orders and issues concerning marital property, marital real estate and debt.

If your spouse or girlfriend or boyfriend is preventing you from visiting or talking to your child as a result of a criminal case or no contact order then you may need to file for divorce or a separate action for custody or visitation in Family Court.

A “no contact order” means that the defendant is precluded from having any contact and or communication with the victim or the person under the protection of the no contact order. This includes but is not limited to letters, emails, text messages or messages delivered through a third party.

In other words if a person is under a no contact order and sees the victim in public they must leave the area immediately and not acknowledge the victims existence. A person cannot even say “hi” if they walk by the victim by chance on the street.

A person who is on probation or a probation attached to a suspended sentence must be even more vigilante in order to not violate the no contact order. For example, a single phone call made by the defendant to a victim under the protection of a no contact order probably means a minimum of ten 10 days in jail at the ACI. We are not talking about the local town jail but the ACI.

Violation of conditions of filing

Please note, that a person who has a filing can be held for up to ten days at the ACI if arrested for a new charge / crime. A person who is on a filing must be very careful that he / she stays out of trouble.

If the person is violated from the terms and conditions of the filing then hypothetically the filing could become a conviction because that person has already admitted to the charges by pleading nolo contendere and giving up his right to contest the charges. Court costs will be imposed if there is a nolo contendere filing in a criminal case.

A probationary period is a time of great risk for a defendant and a defendant must be careful to stay out of trouble!

A person can also be violated for his probation for various infractions that may not be criminal acts but that violate the conditions of probation such as not keeping probation informed of new addresses, leaving the state without permission, not paying court costs or restitution, not properly reporting to the probation officer, etc. When a person is under probation in Rhode Island, he or she is essentially is in a contract with the state to keep the peace, be of good behavior and comply with the conditions and rules of probation.

What is a probation with a suspended sentence in Rhode Island?

If the charges are serious or the person has a lengthy criminal record of has already been placed on probation before then in addition to the probation, the judge may attach a suspended sentence. A person who has a suspended sentence is in a period of extreme risk because a new offense could lead to substantial jail time!

Please note that if the offense is driving on a suspended license there are special rules that apply that are set forth in the statutes.

Most prosecutors and judges believe that each sentence should be more severe then the last. A person’s first minor offense is likely to lead to only a filing which is the lowest form of penalty in Rhode Island. A person usually will only be allowed one filing.

Could I be incarcerated at the aci or serve time in jail as a result of a misdemeanor charge?

Yes. A serious misdemeanor could lead to incarceration at the Adult Correctional Institution (ACI). The Vast majority of misdemeanor cases do not result in a sentence of incarceration! A habitual offender could eventually face jail time. A person convicted of a second or third offense dui / dwi faces a minimum mandatory sentence to the ACI. A person with a probation violation or suspended sentence could face incarceration depending on the circumstances. In a Misdemeanor District Court case the Court only has jurisdiction to sentence a person to a year in jail. In some instances a person might qualify for Home confinement in lieu of a sentence at the ACI.

Please be advised that there are different considerations related to Felony criminal charges which are not addressed in this article including but not limited to deferred sentences. Please consult the Rhode Island Public Defender’s website for information related to felony charges and for an explanation of a Deferred sentence.

It is important that this criminal law article be used for informational purposes only and not as a substitute for seeking legal advice from a Rhode Island lawyer. 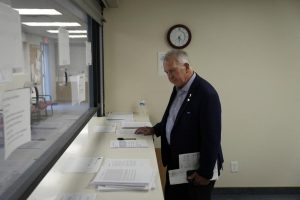