Gee, I wonder what sort of “Look over there!” message the noxious Wendy Bell was trying to send when she posted this: 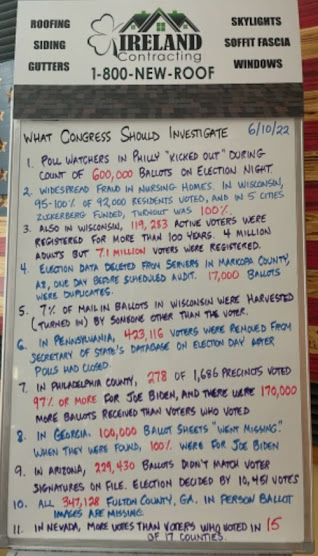 Note the date of Wendy’s BS: June 10, 2022. This is the day after the first televised hearings of the January 6 Committee.

During his opening statement from that committee hearing, Rep Bennie Thompson said:

Don’t believe me? Hear what his former Attorney General had to say about it.

Then we saw this video of former AG William Barr saying:

In that context I made it clear that I did not agree of saying the election was stolen and putting out this stuff which I told the president was bullshit.

Who do you think is closer to the truth?

As an example, let’s take a look at just the first bit of Wendy’s bullshit.

1 Poll watchers in Philly “kicked out” during count of 600,00 ballots on election night.

And from Factcheck, we learn from that poll watcher:

The poll watcher was Gary Feldman, a Republican committeeman who told us in a phone interview that he was going to that location, in South Philadelphia, to collect information about how many voters had been there so far. He went to several other polling places during the day, estimating that he went to one per hour.

“I had no other troubles during the day,” Feldman told us. “That was the only place that denied me.”

What Wendy didn’t say: It was a poll watcher who was denied access to one site (an event the city admitted was “a mistake”) and who went to another site and was allowed access to that other site.

Again, AG Barr said that it was all bullshit.

Then there’s this from U.S. District Judge Matthew Brann in his decision in Trump v Boockvar:

In this action, the Trump Campaign and the Individual Plaintiffs (collectively, the “Plaintiffs”) seek to discard millions of votes legally cast by Pennsylvanians from all corners – from Greene County to Pike County, and everywhere in between. In other words, Plaintiffs ask this Court to disenfranchise almost seven million voters. This Court has been unable to find any case in which a plaintiff has sought such a drastic remedy in the contest of an election, in terms of the sheer volume of votes asked to be invalidated. One might expect that when seeking such a startling outcome, a plaintiff would come formidably armed with compelling legal arguments and factual proof of rampant corruption, such that this Court would have no option but to regrettably grant the proposed injunctive relief despite the impact it would have on such a large group of citizens.

That has not happened. Instead, this Court has been presented with strained legal arguments without merit and speculative accusations, unpled in the operative complaint and unsupported by evidence. In the United States of America, this cannot justify the disenfranchisement of a single voter, let alone all the voters of its sixth most populated state. Our people, laws, and institutions demand more. At bottom, Plaintiffs have failed to meet their burden to state a claim upon which relief may be granted.

No evidence (at least in Pennsylvania) of any sort of the massive voter fraud that Wendy insists Congress investigate instead of the actual January 6 attack on The Capitol.

Furniture Outlet Near Me