As campaigning for the Scottish Election intensifies, so does the smearing and vilification of Alex Salmond.

From its founding event, the classic signs of a concerted take-down of Salmond and his newly-formed Alba Party have been all too apparent.

Whenever you see the ‘mainstream’ media, and particularly it’s liberal commentariat, running major adverse ‘news’ and opinion pieces on such persons it’s a fair bet they’ve been marked down as an immediate and present threat to powerful and establishment interests.

And there are useful illustrations of just how pernicious that response can be.

Jeremy Corbyn and Julian Assange are both, in their own ways, figures who have threatened to disrupt and expose the prevailing order. Both have been subjected to intensive attacks on their characters in order to demonise and marginalise them in the public eye.

It was notable how, without a shred of actual evidence, the weaponised ‘antisemitism’ tag was enough to help take Corbyn down.

The enduring persecution and torture of Assange has seen another such offensive in containing and punishing those who dare expose the crimes and deceit of power, all serving as a threatening reminder to prospective others.

“If everyone can be paced into viewing him with hatred and revulsion, they’ll be far less likely to take WikiLeaks publications seriously, and they’ll be far more likely to consent to Assange’s imprisonment, thereby establishing a precedent for the future prosecution of leak-publishing journalists around the world. Someone can be speaking 100 percent truth to you, but if you’re suspicious of him you won’t believe anything he’s saying.”

The same kind of media-generated campaign is now underway against Alex Salmond.

And the process is remarkably similar:

Alex Salmond represents a substantive political threat to the Union. If the establishment could have found any ‘dirt’ on him prior to or during the 2014 independence campaign you can be sure it would have been used.

But, with public support for independence undiminished, such forces are now using anything at hand to break him. Rather than engage what he actually stands for, the modus operandi is to slander, feed suspicion and destroy.

Salmond has already been through a trial of endurance. Hounded and subjected to unwarranted civil procedures and police investigations, he has faced a criminal court led by a female judge, his defence backed by numerous female witnesses, and been cleared of all charges by a female majority jury. One prior incident of ‘inappropriate behaviour’ has been privately apologised for and mutually resolved. He has also won the civil case against those who used and abused the procedures to deal with such matters.

This is a man who has been relentlessly persecuted, who has contemplated being jailed, his life almost ruined. Yet those responsible for that set of malicious actions remain in office. And an entire establishment campaign is still being waged to bring him down with more mendacious messaging.

On 7 April, BBC Radio Scotland’s Good Morning Scotland ran an audaciously loaded line of questioning on Salmond’s supposed ‘links’ to Russia and Vladimir Putin. Salmond comperes an independently-produced show which, like many others, is aired by RT. This gave presenter Gary Robertson the supposed cue to drill Salmond on his ‘connections’ to the Kremlin and, astonishingly, whether he thought Russia was behind the alleged chemical attack on the Skripals in Salisbury. Though preceded, in hostile fashion, by some actual points on independence, Robertson spent longer on this ‘topic’ than any other, consistently repeating his risible questions. With so much at stake in this election, and with so many immediate issues to probe and discuss, it is truly revealing that the BBC made the decision to run this line of ‘enquiry’ and give it such air time.

The ‘story’ of Salmond’s ‘denial’ was, of course, picked up by the entirety of the Scottish press, notably the Daily Record’s vitriolic Paul Hutcheon, and turned into predictably shrill headlines. The same ‘story’ was then exploited by every opposition party, including, and most vehemently, the SNP.

Altogether, a neat example of how to construct, amplify and peddle a smear.

However, Salmond has shown an admirable ability to take on such media and its smear tactics.

In an illuminating interview, hosted by political analyst James Kelly, Salmond gave vent to his feelings on the dismal state of the BBC, STV and other ‘mainstream’ media in Scotland, stating:

“These are people who should look to themselves and what their public duty is.”

He also reinforced such points in another discussion with Galician journalist Pilar Fernandez:

“The establishment of these organisations is totally and utterly decrepit…They’re incapable of organising their coverage in an intelligent, or fair, or impartial manner…In the case of the BBC, well, it’s par for the course.” 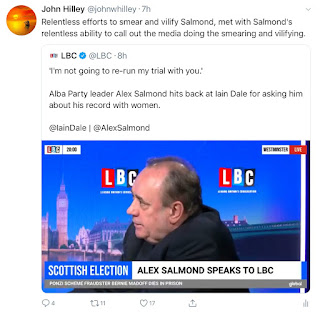 Again, as Dale was to discover, Salmond showed himself not only adept in his own defence, but ready to shine a critical light right back on the media running such smears.

Salmond has no need to express contrition for appearing on RT. As he reminded Dale, his programme is made by an independent company and hosted without interference.

More usefully, Salmond’s critics should be mounting serious interrogations of the BBC, and thinking about their own appearances on it, British state media having the worst record in world history in fronting imperialist propaganda and covering for the UK’s mass crimes against humanity.

That damning truth cannot be countenanced by such journalists, just as it’s now beyond the SNP leadership itself, a party now in the grip of anti-Russian hysteria, as amplified by the NATO-promoting, MI5-liaising Westminster duo Stewart McDonald and Alyn Smith.

Their relentless attacks on Salmond, Russia and RT are now part of the same establishment agenda.

And it’s that very same set of slurs that are being repeatedly run by Scotland’s ‘leading political journalists’, Paul Hutcheon, Tom Gordon, David Leask, Kenny Farquharson, David Clegg and others.

Lamentably, a further ‘left-liberal’ commentariat in Scotland have joined in this petty denigration of Salmond, with their posturing cries of ‘Kremlin stooge’, ‘ego trip’ and ‘inappropriate person’.

Few amongst this parochial media class have made any serious effort to address the actual dynamics of the independence issue, the SNP’s refusal to deliver it, why that has opened up new political space, bringing Alba into play, and how it came to be led by Salmond. Instead, a major political development, requiring commensurate analysis, has been reduced to sneering jibes and woke virtue-speak.

There’s no acknowledgment either that substantial sections of women are not only comfortable with Salmond’s leadership, but have abandoned the SNP for Alba because they see it as a much greater protector of women’s rights. Indeed the majority of Alba candidates are women.

Where’s the real critical analysis of how all that came about on Sturgeon’s watch, particularly given her own avowed feminism? 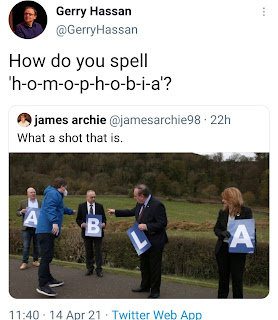 Another such attack line has been to denounce Salmond and Alba as ‘homophobic’, as in a particularly ugly message from BBC-favoured political commentator Gerry Hassan.

Impressively, Salmond called-out Hassan’s mendacious comment in his interview with Dale.
(Presumably concerned at this and the damage to his ‘academic reputation’, Hassan later took the tweet down.)
Hassan has been pouring out a whole range of these facile claims, from ‘Kremlin paymaster’ and ‘male Alba’, to ‘reactionary Salmond’.
The crude attempt to taint Salmond and Alba in these ways demonstrates just how readily such media have pandered to an ‘on-board’ identity politics, failing even to acknowledge Salmond’s own past record on such matters.
Salmond, of course, was the First Minister who introduced same sex marriage in Scotland.

Alba’s women’s ‘and equalities statement also includes a very clear pledge to defend all minority rights, initiate a citizens’ assembly to look at the gender recognition issue, and to work in a much more consensual way over these matters than what’s been going on inside a highly-controlled SNP.

Attempts to portray Alba as some kind of right-leaning entity are similarly spurious. Essentially, this is a left-of-centre social democratic party, with a primary focus on independence. Indeed, with figures like Kenny MacAskill, Chris McEleny, Michelle Ferns and George Kerevan on board, it stands considerably to the left of anything currently evident within the SNP leadership. Forthcoming Alba policies are also likely to veer leftwards of the SNP’s essential neoliberalism. The key appeal, for now, is the vital opening it presents for an immediate and more effective set of routes to independence.

It’s also well worth remembering that the Alba Party itself was founded by admirable leftist investigative journalist Laurie Flynn, someone the current media crop couldn’t remotely hope to match.

All told, this whole set of events has revealed the dire poverty and shameful prostration of ‘mainstream’ journalism in Scotland. Likewise with much of its liberal-left online circle.

As the entire effort to ruin Salmond has shown, there’s a deep seam of political and establishment corruption to be mined and exposed here. But there’s a dearth of serious investigative journalists willing to do so.

And the continuing denigration of Salmond in the course of this campaign has been another example of a service media lining up with the prevailing order to break a dangerous and threatening figure.

Glenn Greenwald has called the British media the most servile in the world. That’s quite an indictment.
And there’s a particular case study of it to be viewed here, right now, in Scotland.

Sat May 14 , 2022
NEWYou can now hear to Fox Information content articles! Oklahoma Gov. Kevin Stitt on Tuesday signed a Texas-type abortion ban that prohibits the process soon after six weeks of pregnancy. The invoice can take outcome instantly, while abortion-legal rights advocates have by now challenged the legislation in court docket.  “There […] 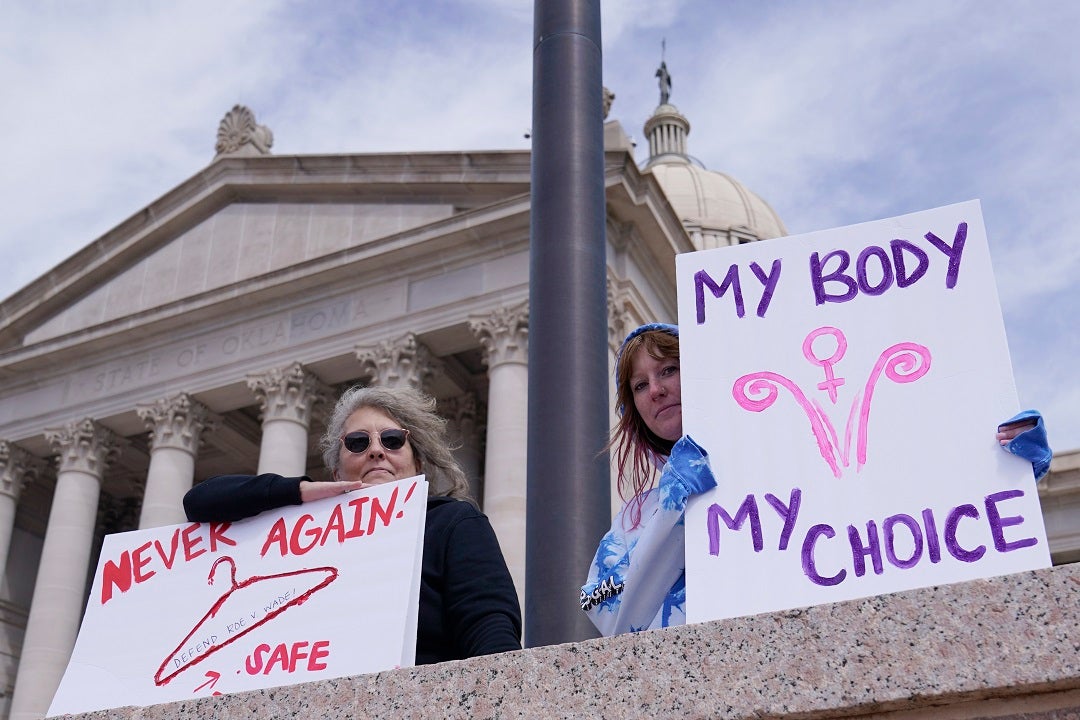