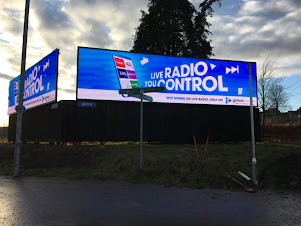 Here’s a dispiriting site to behold. The completion of two giant electronic advertising structures at a well-known green spot on Glasgow’s southside.

As previously detailed, an application by Global Media advertising for this brutal edifice was approved by Glasgow Council without any apparent local consultation or regard for its invasive environmental impact.

It may not seem the most pressing issue right now. But it’s still heart-sinking to see this corporate-imposed eyesore finally standing there, blocking out a beautiful mature tree and pristine hillside.

Instead of an unbroken green vista, we now have this brash construct pulsing out its neon mediocrity and demanding our attention.

And, with the COP26 eco-summit coming up in Glasgow (November 2021), isn’t this just a great advert for the city’s grand claims to be ‘curbing’ car culture and carbon-polluting consumerism? 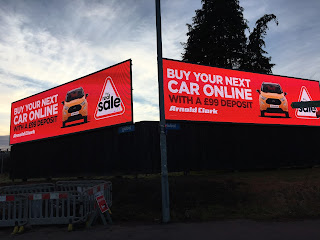 It’s the brazen enforcement of such ugliness that’s so disturbing, the sense in which people’s thoughts and aesthetic feelings are somehow just deemed irrelevant, all subsumed to corporate priorities.

Imagine this kind of blight being sited near the wealthy homes and leafy locales of Global executives.

Yet their arrogant blindness to the degradation of others’ environment in the name of profit is matched only by the myopic jobsworths that pass themselves off as ‘planning officers’.

Again, it’s notable that not an apparent word of concern was raised against this application by a council proclaiming its eco-principles and commitment to green urban living.

A blot on the landscape and an embarrassment of vision. Think of these crass structures as ‘monuments’ to the greed, ignorance and servility of all involved.

Health Clinic Near Me